In the History of hip-hop, there have been many albums and many album titles.  Like other categories of music, you do have intriguing names, some that lend a trail to the listener that leads them to what they are about to partake.  For the most part, and especially in hip-hop, there are titles that don’t do the content justice. 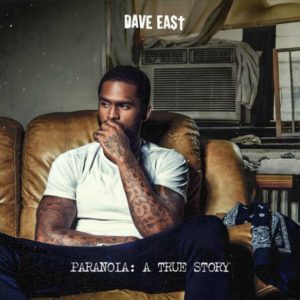 A brag-heavy display of machismo that would need to be turned down to hear his real thoughts. I figured that it would not have the depth that I know that someone as talented as Dave is capable of.

The album starts of with the Jeezy-assisted “Paranoia.’  It’s a thorough, hard nosed, but mis-titled and lackluster effort.  Dave spits a chorus that lightly details his anxiety, but does nothing to expand on it as he brags through his verse. Jeezy follows suit on his over a slow-pounding trap beat.  “The Hated” touts a Nas feature, but only has the Queensbridge legend on set for some hyping at the beginning and end of the track. Dave does very well to fill the sandwich with a dark, hood tale of descent that utters

“Killers kill you for talking, all you have to do is speak.”

The energy of the album takes a shift as the Whiz Khalifa – assisted “Phone Jumpin” comes on, features the two rappers driving sped-up rhymes over a trap beat and a violin-sample that reminds me of “Gimme Some Mo'” by Busta.  Dave notes, “a lot of hammers and a lot of lead, a lot of Phantoms and a lot of red” as they detail a wild life of crime. A boring Chris Brown hook litters ” Perfect”.  While Dave is just as thorough as usual with chunky bars on this, his deadpan delivery seems to drag to the album along at this point. He returns to the braggadocio on “Found a Way” where he cleverly states “I aint touch her body, but the bitch came,” but seems to fall flat on a laid back piano selection.

French Montana is onboard for “Maneuver”, where the the tempo of the album shifts to a cruise-able pace, ironically enough.  Another Patek Philippe advertisement is dropped ( there are a few n this album.) Dave and French flip back and forth on one verse as Dave states “I’m in Miami with Sade on repeat, 50 grand, put it under the seat, keep a gun in my reach, walk in my shoes? couldn’t fit one of my sneaks.”

“My Dirty Little Secret” is a strong track that crawls along and then stands tall on a guitar-strummed tale. There is definitely an attachment to his standing on detachment: “Online shopper, she don’t gout, she just orders, I’m just trying to find out if she suck a mean dick, and put cheese on her grits.”

I wished that he went  a little further with “Wanna Be Me”.  He drilled into his pscyhe, while revealing flying fears and desire to be closer to certain family members.   It just seemed too short. “Have You Ever” is a scattering of regrets, desires and pride to close out the EP.  There are 7 and a half minutes of skits that seem to do little to lend to the album.  The Khiari skit seems unnecessary as he has mentioned his daughter a lot on the album, though it is cute to hear her.

Again, the skits did nothing for the album, and he definitely could have gone feature -free for the album.  Dave East definitely stands well on his own two, and would be able to carry a full project.  This EP shows great effort, and rhyming skill that is not easy to achieve.  With fuller songs, and more concepts , I am confident that he can manufacture a great album, or even a classic.  Now that we are aware of his background, and some of his thoughts, its up to him where he wants to take his story. There is room for re-tread, but even more for growth.

The feel of the album does shift back and forth from him proving himself well over trap beats, to storytelling over a couple head nodders, to getting vulnerable over a slow groove.  Combing the three efforts and pushing forward is definitely possible, when sounding more inspired. I wanted to know more about his “Paranoia.”